Jane Fairhurst gained her Masters Degree in Fine Art with distinction from Liverpool Art and Design Academy in 2010.

Often using ethnographic artifacts as her starting point she makes work that explores the transformative power of art to question all manner of issues in contemporary society.

Combining her fine art craft skills and a wicked sense of humour she focuses upon her chosen subject be it the environment, feminism, global politics or societal issues.

‘Assemblage is a work of art made by grouping together found or unrelated objects.’

“I collect the objects I use in my work from many places. Charity shops, car boot sales, pound shops and museum shops provide me with objects such as toys, small objects, fossils, boxes, cages, glass domes etc. I collect organic materials when I’m out walking in the countryside or on a beach and I use things I find in my home and garden such as animal bones, seed pods, skulls of dead birds and small animals, plant and tree roots, tree branches etc.” Jane Fairhurst 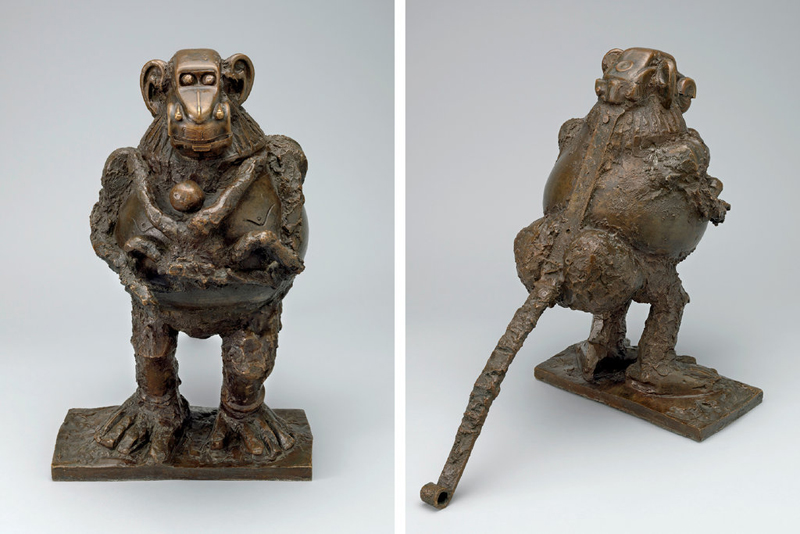 Pablo Picasso is regarded as one of the first artists to group unrelated objects in his work. He included toys, bicycle handlebars and other materials in his sculptural works. I found inspiration  in Picasso’s assemblages and those of artists Kurt Schwitters and Joseph Cornell but the work that has inspired me since childhood is that found in museums under the heading ‘Ethnographic Artifacts’. Artifacts such as Nkondi, fetish objects of the Kongo peoples of central Africa and Yup’ik masks of the Inuit peoples of the Arctic. 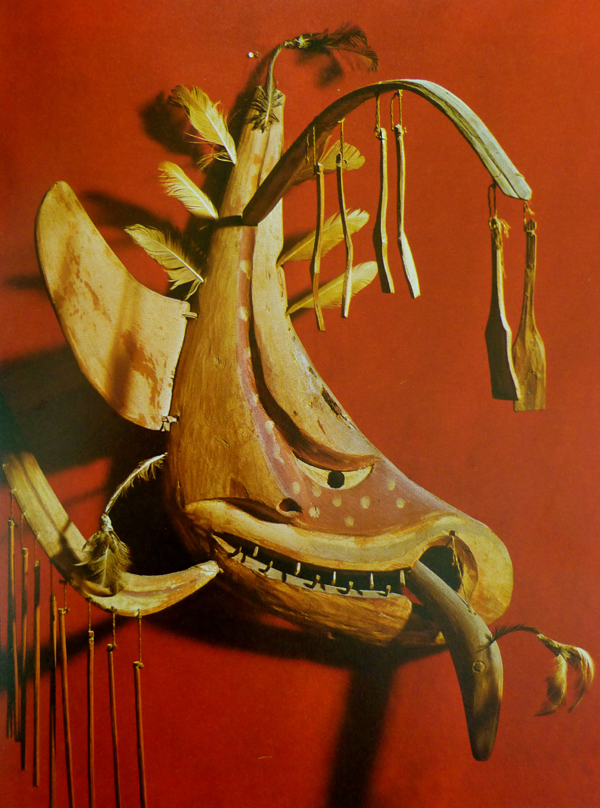 Artists whose work has inspired me include: 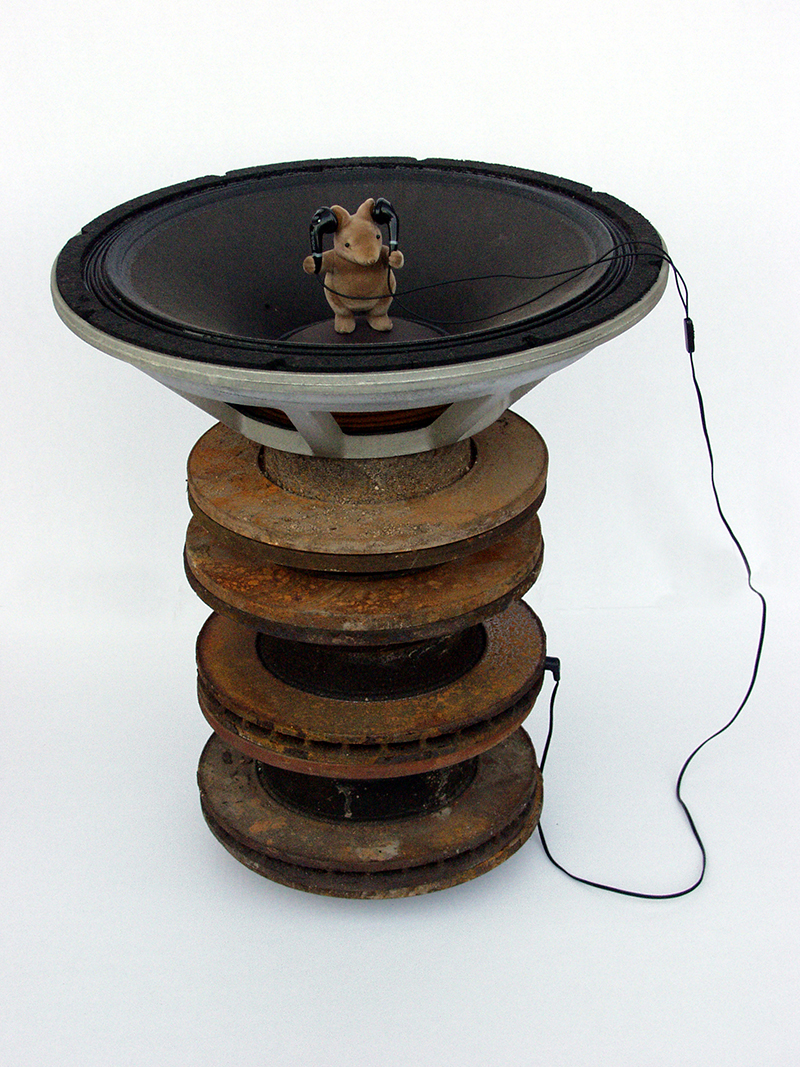 Here I’m addressing the noisy world we inhabit from traffic noise and airplanes flying overhead to ‘musak’ in shops and shopping centres. 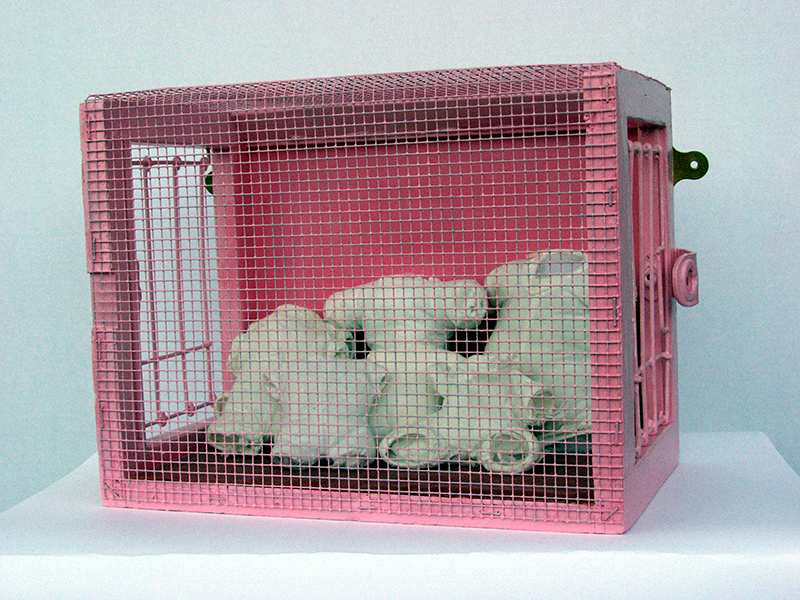 This piece represents an emotionally difficult time in my life. The bodies are trapped inside the pretty pink, unlocked cage, unable to move as they lack arms, legs and heads….sometimes life feels like this. 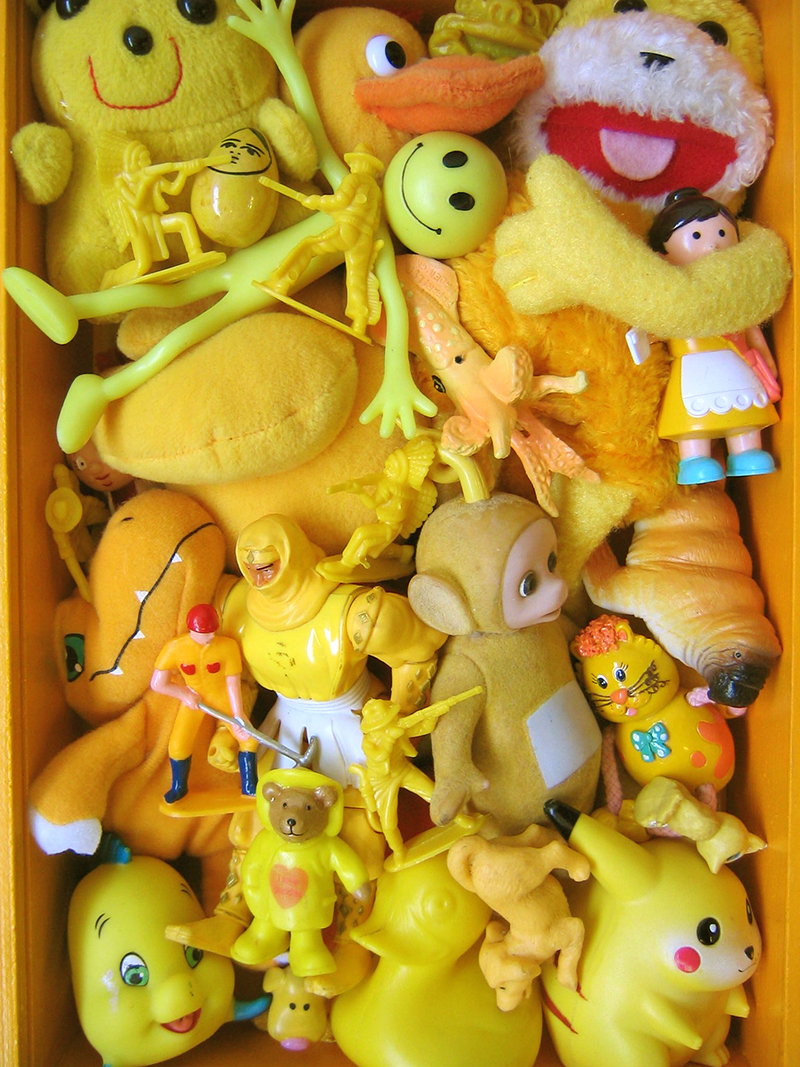 There are 17 boxes in this series, all different colours and resembling an artist’s paintbox. They are also a memory box for 2004 and a critique of consumerism, using the earth’s valuable resources to make toys that are soon discarded. 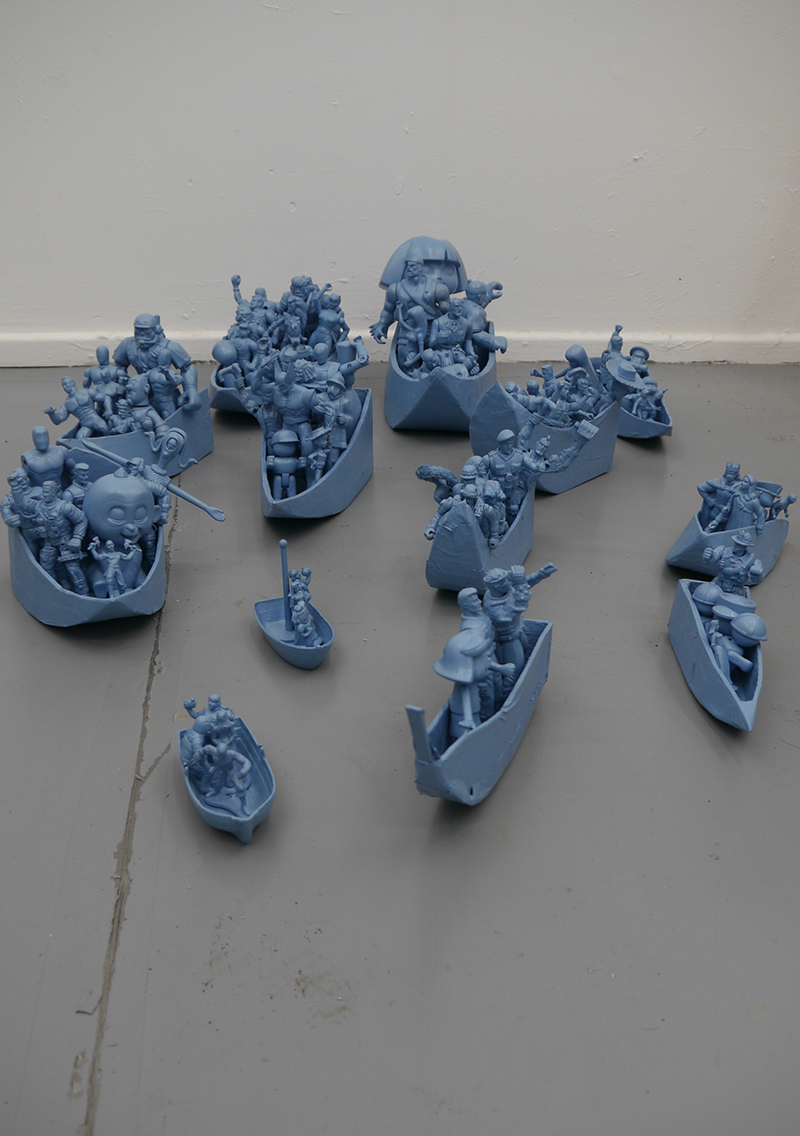 Over the Water-2008 mixed media assemblage

Originally made for the 2008 Liverpool Biennial Over the water was my response to the theme of Migration. The work is comprised of a series of boats constructed from cardboard and tape and filled with toy figures that are painted blue/grey as a means to remove individuality from both figures and boats.

With the current refugee crisis resulting from instability and war in the Middle East the work is as relevant today as it was back in 2008. 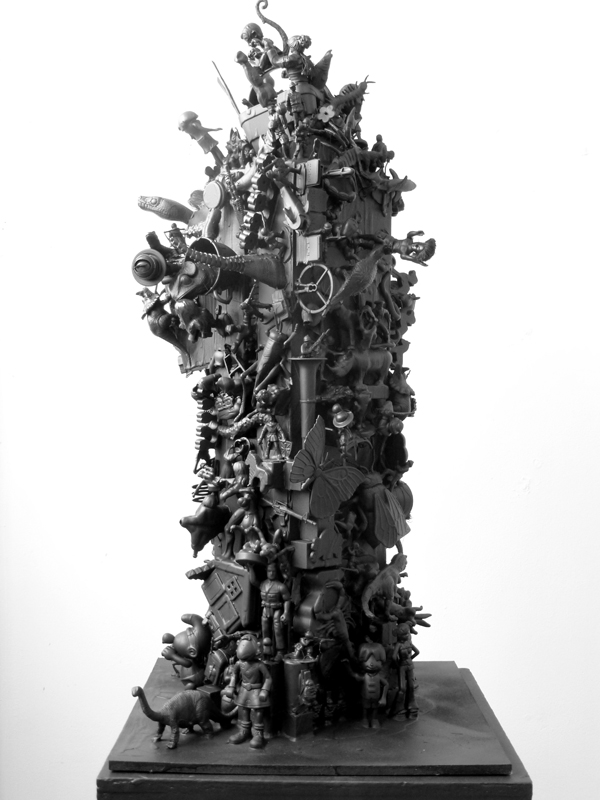 This piece was inspired by the biblical story of the Tower of Babel and J.G. Ballard’s dystopian novel High Rise. 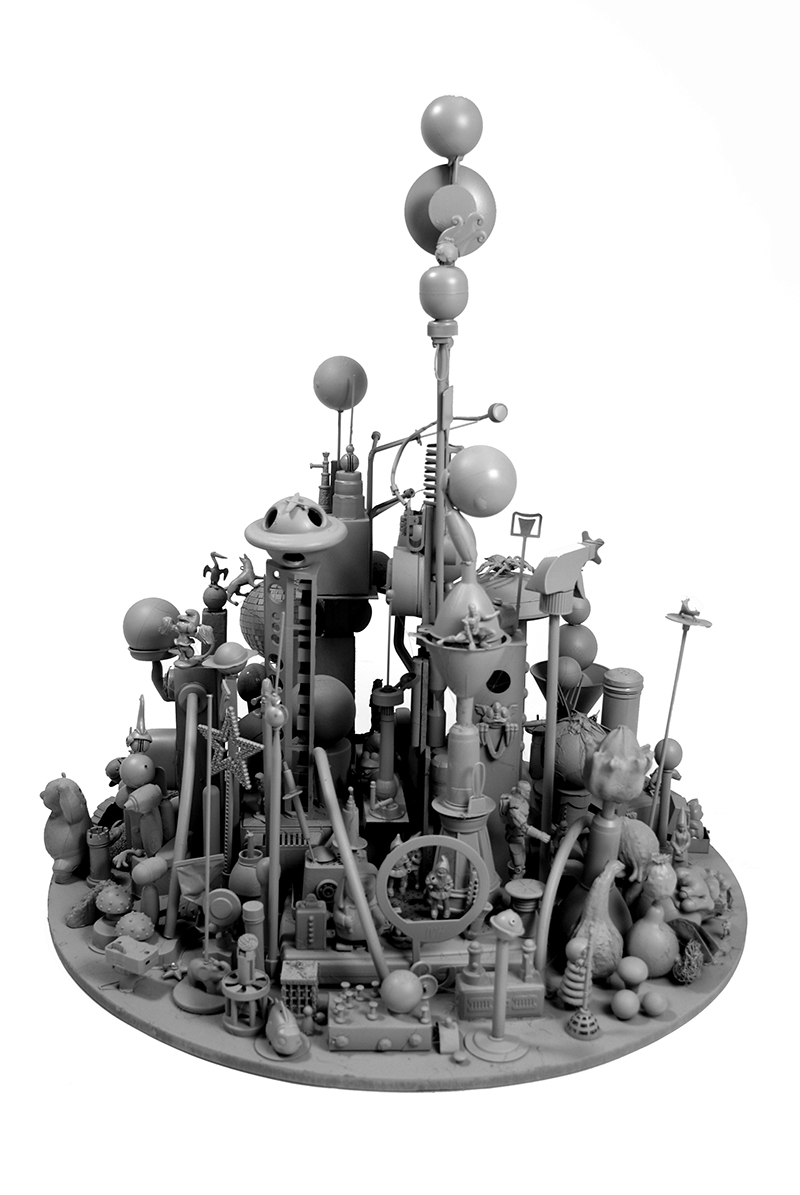 This sculptural work was made in collaboration with fellow student Tim Fielding. We worked together from 2008-2010 during the time we were studying for our Masters Degree. We made a series of these ‘disk’ works which came together with other assemblages to create one huge city. 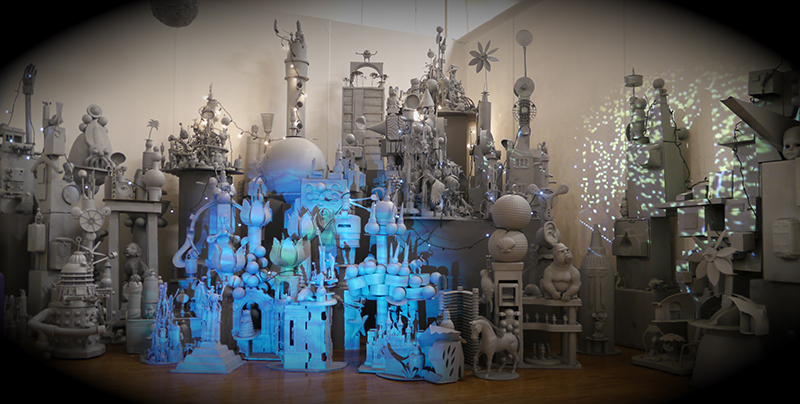 The photograph of this large scale work was taken when it was exhibited at Chapel Gallery, Ormskirk in 2012. The installation included a series of images projected onto the work and a recording of ‘city’ sounds, traffic, planes, people, dogs barking etc.

History of the Future is a complex work that critiques political ideologies, social systems and the impact of art and design and architecture, prompting questions relating to the fabric of our built environment, how and why it has developed in the way it has, who makes these decisions and, ultimately, what effect the place we live in has on our lives. 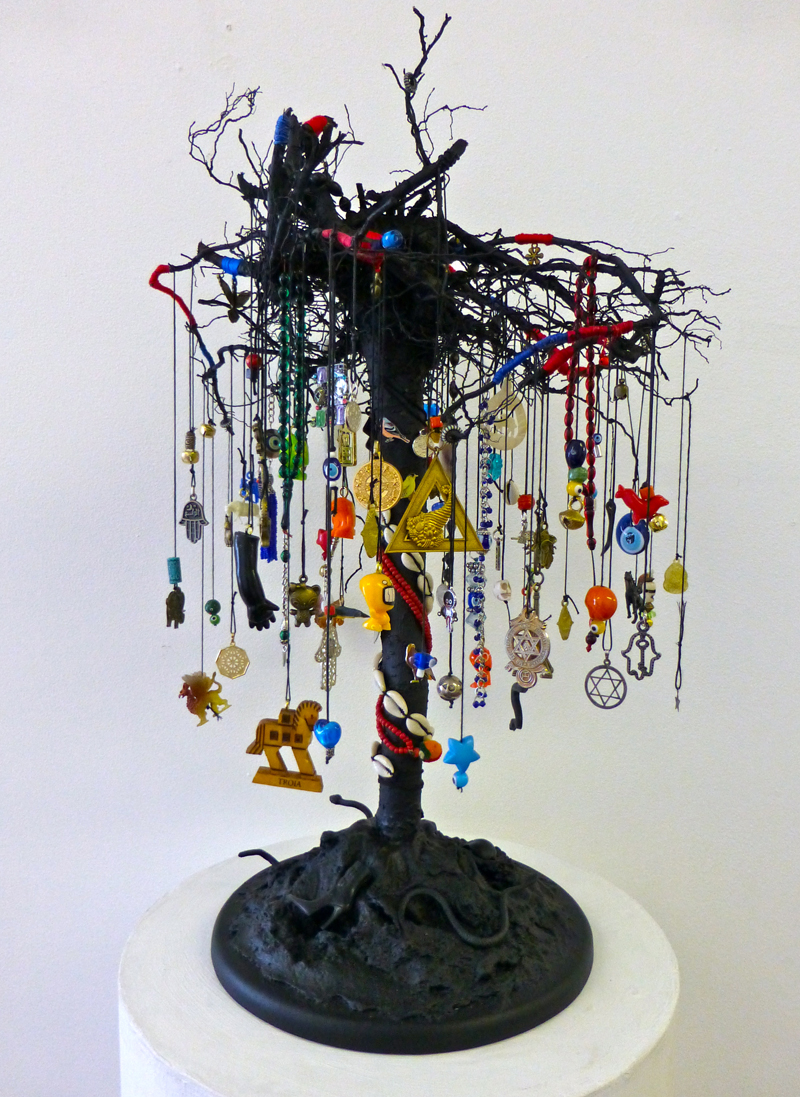 This tree root is hung with all manner of objects that have equal importance to all manner of people of any sex, age, race or belief system. 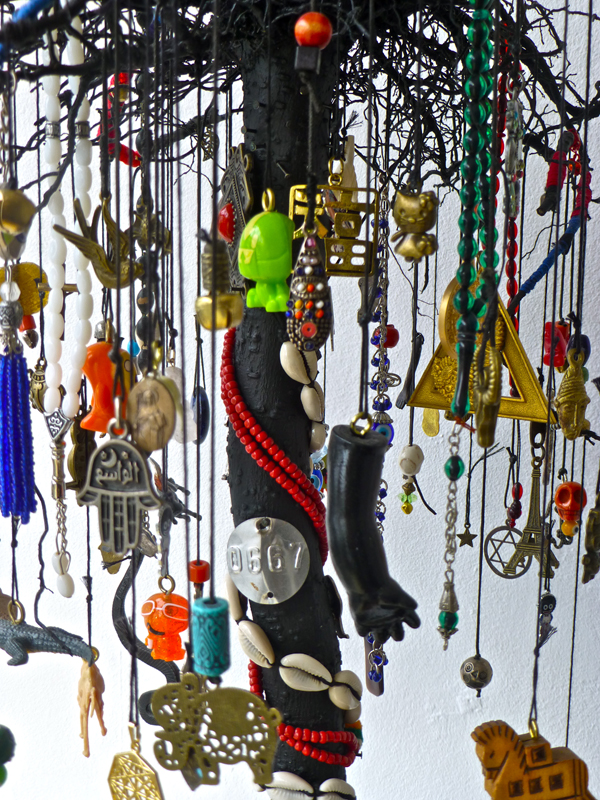 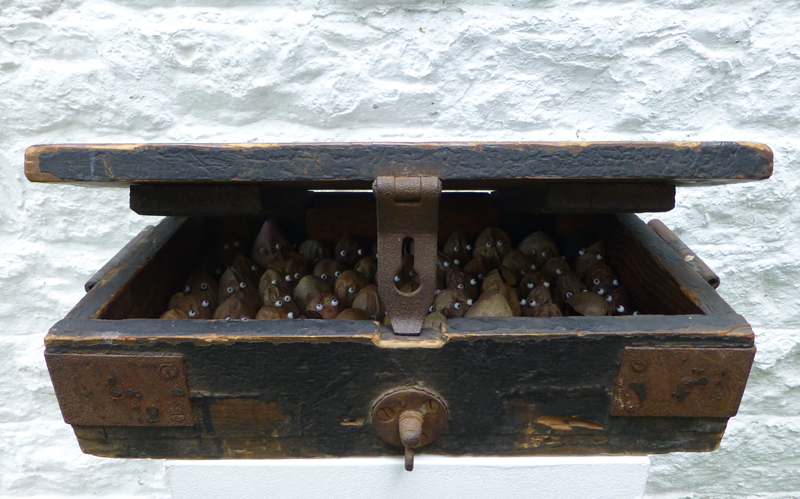 I collected the stones from avocados I ate during two years and as they accumulated on my window ledge they began to resemble people of  different shapes and sizes. Adding the mapping pin ‘eyes’ I placed them in an old ammunition box that had been in my studio for some years. Listening to the terrible events unfolding in Syria, the civil war and communities bombing one another this work took on the appearance of people sheltering from attack. 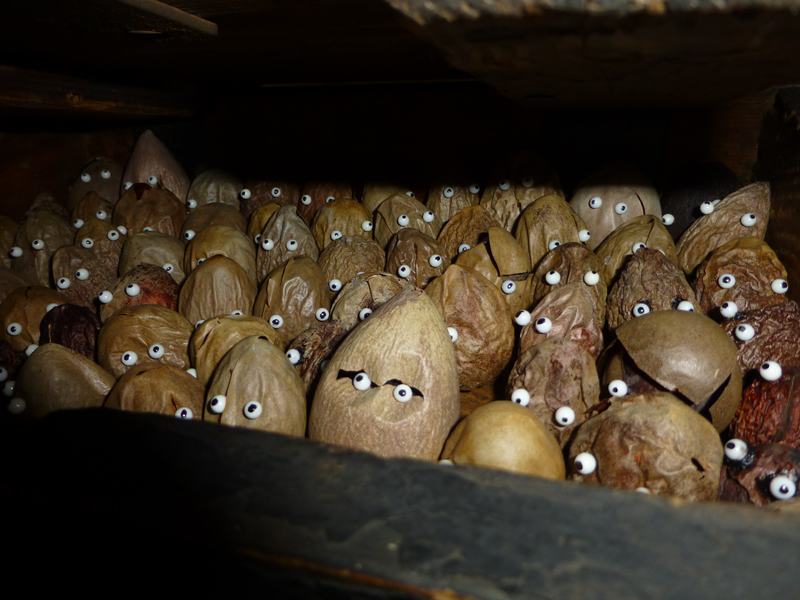 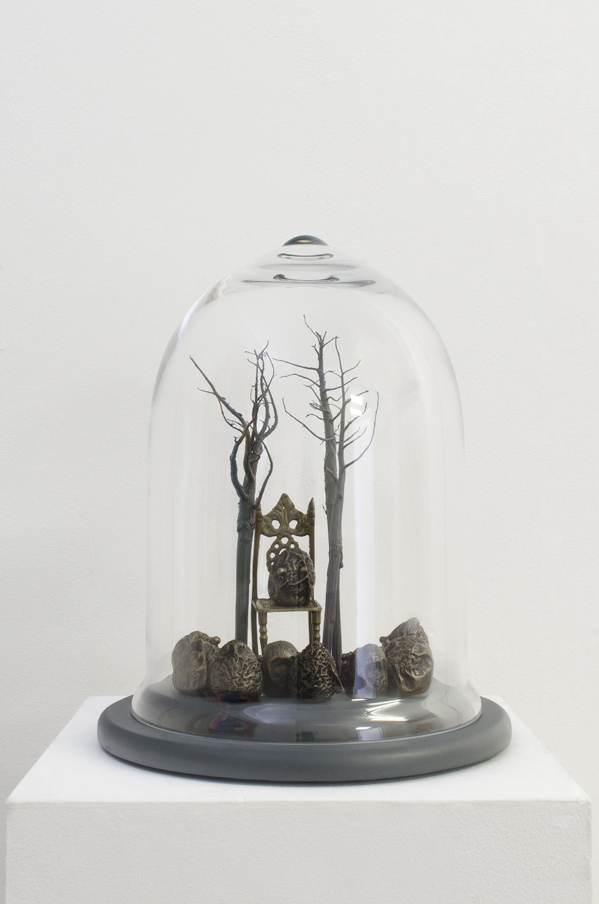 An artist friend helped me to cast some of the avocado stones in bronze using the ‘lost wax’ method. I liked the idea of taking something that would otherwise be thrown away and transforming it into something precious that would last forever. What will future people think they are, deities? gods? part of a game?

For me, this piece is about the destruction of schools in countries such as Afghanistan, where girl children had to be educated in secret, and classes were held outdoors…but it could be a religious meeting or a meeting of revolutionaries. Like all artworks it is about whatever the viewer sees. 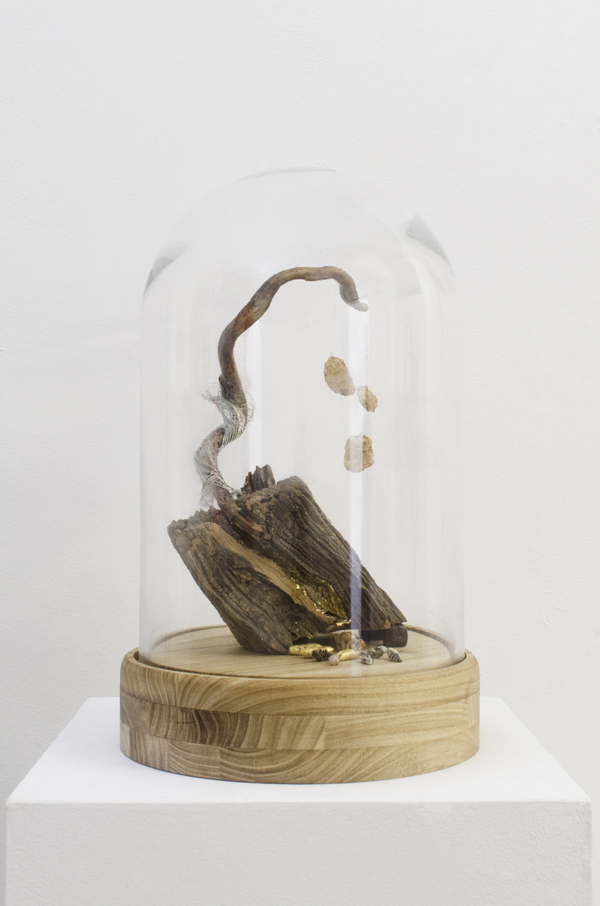 All the assembled materials in this piece are dead.

According to Charles Darwin, who in 1859 wrote his famous book On the Origin of Species, ‘if all the bees were to die then the human race would not survive since most of our food plants are pollinated by bees’. The precious metals, gold and silver will have no purpose then.

Alarmingly the bee population is declining dramatically due in part to the chemicals used to kill weeds and insects on our food crops. 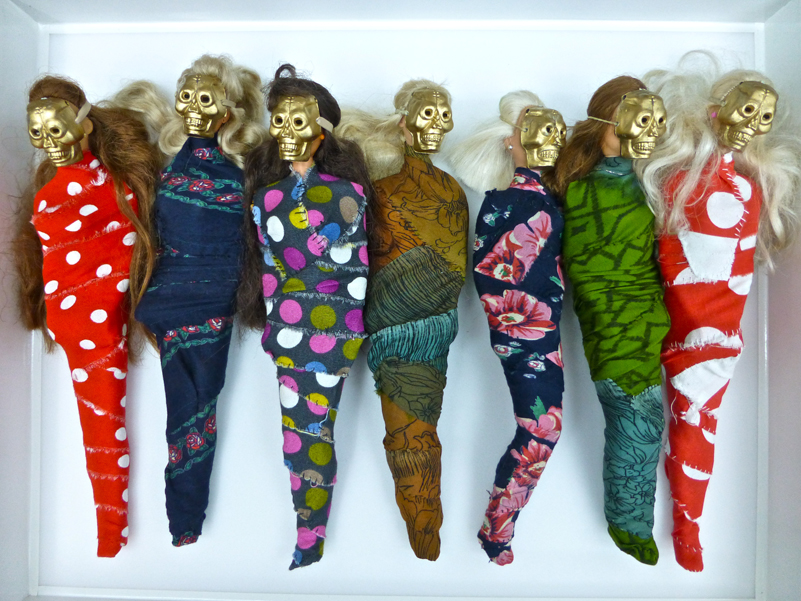 This piece addresses the extreme lengths that some women will go to in order to make themselves ‘beautiful’. 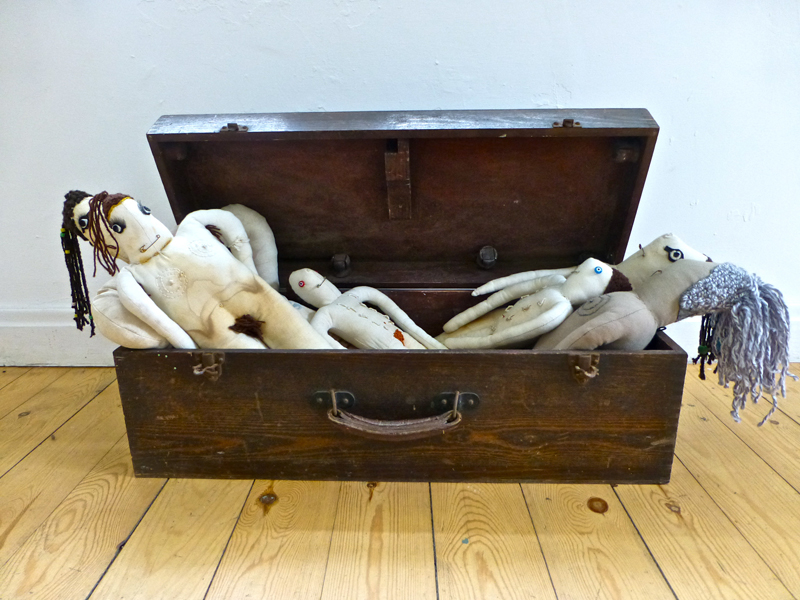 Based upon the Ancient Egyptians idea of servants (shabti), who accompanied the dead in order to work for them in the afterlife, I made this ‘tongue in cheek’ assemblage suggesting that we live in a world where women will still be expected to do the cleaning even when we are dead! 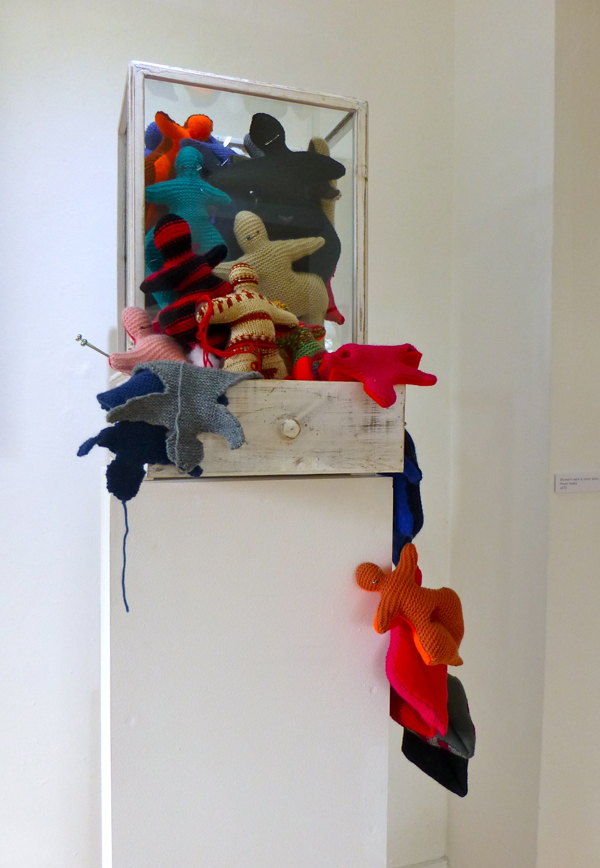 When male archaeologists first came across the many female figures made during the ice age they thought they were dolls or pornography for ice age men! We now understand how fragile those ancient peoples lives were and how important the birth and survival of children was for the tribe.  It is now accepted that they were in fact objects made to protect women and their babies during pregnancy and childbirth.

I am continuing to knit the ‘Venus’ figures and add them to this assemblage/installation so it is a work in progress and may ‘never be done’.